The U.S. dairy industry is facing challenges with small family dairy farms going out of business, growing consumer demand for plant-based dairy alternatives, and increasing awareness of the negative environmental impacts of large dairies. Amidst these big problems, one small company wants to fundamentally change dairy production to a regenerative organic, nutrient-dense, and environmentally- and climate-friendly system.

Adrian Bota, co-founder and CEO of Ohio-based Origin Milk, says he wants to bring “some much needed innovation and disruption to the dairy industry.”

“Let’s give people dairy products that are more nutrient dense. Let’s give them something that is helpful to the planet, and let’s do something good for the soil along the way,” he says.

Better nutrition is one of the pillars that Origin Milk is founded upon. The company promotes its milk as “A2 Heritage.” Their milk contains the health-promoting A2 protein, which is produced by heritage breeds of cows such as Guernsey, Jersey, Milking Shorthorn, Dutch-belted, and Brown Swiss.

Cow’s milk traditionally contains the A1 and A2 proteins. But according to Bota, breeding of Holsteins—the dominant breed of dairy cows—to produce increasing amounts of milk in industrial dairy production caused a genetic mutation that led the cows to produce only the A1 protein.

“The A1 milk protein is not natural for our digestion,” Bota says.

As a result of drinking conventional A1 milk from Holstein cows, 25% to 30% of Americans complain of difficulties digesting dairy, he says.

By contrast, Origin Milk’s Guernsey and other heritage cows produce the A2 protein, which produces more nutritious milk.

“It has more protein, more calcium, omega-3s, and vitamin A and D than milk from Holstein cows,” Bota says.

Two papers from Purdue University and the University of Auckland suggested that people with lactose intolerance experience far fewer symptoms from drinking A2 milk than conventional milk.

Origin’s milk also has a golden hue, the natural color of nutritious milk, not white.

The products are sold at national natural food chains such Natural Grocers, Mom’s Organic Market, and Whole Foods Market as well as a range of other retail stores in 17 states.

“We try to take the 360-degree holistic look at the entire ecosystem in the dairy world—from soil to animals, to the crops, to the farmers, and to the consumers, and try to connect the dots in a unique way,” he says. “And for us, that converged in regenerative organic farming practices and heritage breeds of cows that are also genetically A2, and that’s what our focus has been.” 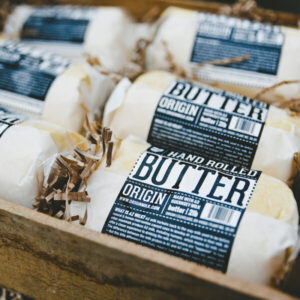 Origin works with 24 organic dairy farmers in Pennsylvania, Ohio, and Colorado who produce the company’s A2 milk. The farms use regenerative organic practices, and the heritage breed cows are raised on pasture.

Bota says there are another 38 farms on a waiting list to join the project. “If we really opened it up and recruited, we could add another 70 or 80 farms to that waiting list,” he says.

The farmers are paid a premium price for their milk. “Everyone talks about fair trade with Kenyan coffee or Brazilian sugar but very few people talk about fair trade or pricing fairness for American farmers,” Bota says.

Origin has a strong focus on regenerative organic agriculture with its emphasis on soil health.

“Soil health is incredibly important to us,” Bota says. “If we get healthy soil, we’re going to get nutrient dense grasses. Those grasses are going to be eaten by our cows, and they’re going to produce a superior quality, great tasting milk.”

Origin is a partner in a $1 million initiative to create the nation’s first regenerative organic dairy supply chain, the Dairy Grazing Project, which aims to help clean up the Chesapeake Bay watershed. With a grant from the National Fish and Wildlife Foundation, Pasa Sustainable Agriculture hopes to transition 10,000 acres to grass-based dairy in southeastern Pennsylvania. This includes 6,000 acres of cropland to managed grazing systems and 4,000 acres of cropland to perennial hay.

The Dairy Grazing Project aims to improve water quality in the Chesapeake Bay by reducing annual runoff by 400,000 pounds of nitrogen, 9,000 pounds of phosphorus and 23 million pounds of sediment.