A description of Adrian Bota’s startup could easily get the business confused with one of Denver’s craft breweries.

It sells a premium beverage processed in small batches and that’s targeting foodie consumers. But it’s not booze or beer the company sells; it’s milk.

And it’s produced by a breed of cows that corporate dairy giants no longer use, yielding milk that’s more full of fats and flavor and that can be shades darker than the familiar snow-white milk that fills most jugs.

The color difference is Origin Milk’s most distinguishing feature in the dairy case, one that tends to attract discriminating, curious palates.

Go ahead, call Origin Milk a “craft milk.” The company wants to be different.

“It’s not because we’re trying to be cool,” Bota said. “It’s because it tastes better, and the milk industry is broken.”

Origin Milk has been appearing on the shelves of refrigerated cases in Natural Grocer’s Vitamin Cottage stores in Colorado and in the state’s Whole Foods.

The company is based in Cleveland and works with partner dairies in Ohio and eastern Pennsylvania in addition to Colorado. Bote partners with local dairy farmers raising only Guernsey breed of cows and using environmentally friendly regenerative pasturing practices.

Origin Milk has launched in Colorado stores this year after striking up a partnership with Colorado Cow, a Kersey-based dairy farm run and co-owned by Terry and Julie DeGroot.

The husband and wife, third-generation dairy producers, assembled a herd of 70 milking Guernsey cows and arranged for a processing facility it could use outside Longmont and became Origin Milk’s supplier in Colorado.

The company’s milks and cheeses, made in partnership with Haystack Mountain Dairy cheeses in Boulder County, are sold now through the two grocery chains.

“We were small for the industry, and we were getting killed,” he said. “The name of game of was milk more, milk harder and milk faster.”

With two young kids, the DeGroots wanted Colorado Cow to be a family dairy farm that could be sustained with fewer cows.

“We knew we wanted Guernsey cows, and we wanted to do A2 milk,” said Julia DeGroot, referring to non-Holstein milk that has different amino acids and can be drunk by many people who are dairy intolerant to typical cows’ milk.

Months searching online and reaching out to owners of some of the 14,000 Guernsey cows in the country eventually found them the first animals for their herd and brought them into contact with Bota and Origin Milk. 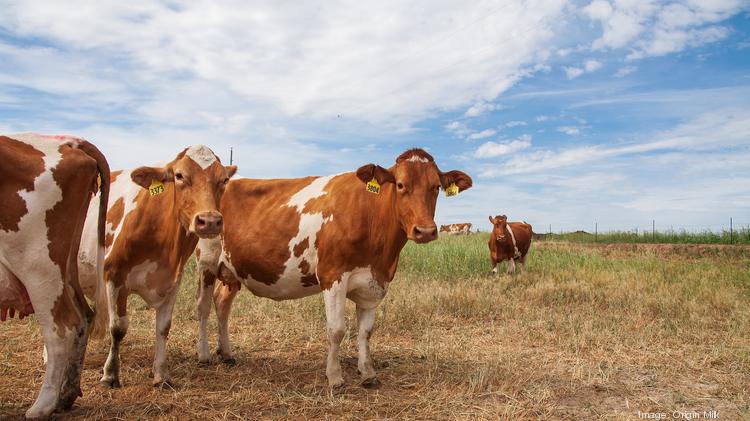 There was no way Colorado Cow could have distributed Guernsey A2 milk through the normal sales channels, which are dominated by the Dairy Farmers of America, an arrangement Terry DeGroot jokingly refers to as “the milk mafia.”

Holstein milk goes to all the big milk companies, bottlers and dairy food producers like Noosa Yoghurt and Leprino Foods.

Phones calls soon led a partnership between Colorado Cow and Origin Milk to launch the brand in Colorado, a state Bota says has an unusually open and entrepreneurial food scene.

Origin Milk sells about $120,000 worth of milk monthly nationwide, a drop in the bucket compared to big dairies and even locals like Meadow Gold and Royal Crest, Bota said.

But he’s planning to be bigger soon.

Now that he’s started in Colorado, he’s working with farmers in North Carolina and Texas hoping to bring Guernseys and Origin Milk to those regions, too.

The mainstream milk industry has been battling to keep its market share from being eroded by plant-based alternatives. Bota believes the emergence of “craft milk” with more fats, nutrients and flavor from Guernsey cows will be part of the answer.

“If people are going to be drinking dairy milk, they should be drinking the best,” he said.