Conventional beef and dairy production are far from sustainable, so it’s no surprise that consumers—and farmers—continue to search for alternatives. For those who don’t plan to join a raw milk share from a local farm and who haven’t jumped ship yet for oat milk, the next-best solution may be regenerative dairy products, which go beyond organic and grass-fed in terms of mitigating production impact on the environment.

Thanks to a partnership between Colorado Cow, a small family-operated dairy in Kersey, and Origin Milk, Coloradans now have a convenient option for purchasing regenerative cheese and milk. Based in Ohio, Origin expanded into Colorado in 2019 by assisting Colorado Cow in making the switch from conventional dairy farming to a regenerative model, and now the dairy’s operation exclusively produces creamy, nutritious milk from Guernsey cows.

Origin founder Adrian Bota initially identified Guernseys for the nutritional and taste benefits of their milk (more on that in a bit). He soon found that these heritage breed cows eat 20 to 30 percent less feed and drink 20 to 30 percent less water than black-and-white Holsteins (the dominant breed in the American dairy industry) yet still produce the same output of milk. “There’s a built-in sustainability to heritage breeds,” Bota says. 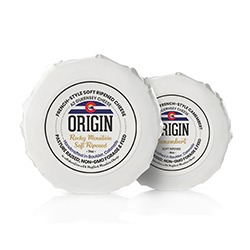 “Before [the Origin partnership], my dad was factory farming. He didn’t like how the cows looked and he didn’t like how he felt about it,” says Terri deGroot, owner of Colorado Cow. “Since we had such a large herd before, we had to have staff milk the cows. We have a small herd now of Guernseys, so we are the ones milking the cows everyday. We went from corporatism to actually being farmers again.” deGroot also receives real-time advice on soil health and regenerative grazing from Boulder-based nonprofit
Mad Agriculture. “I’ll text MadAg pictures of what the soil looks like that day, and they’ll immediately get back to me about how to tend to it,” deGroot says.In addition to the inherent biodiversity and efficiency of Guernseys, Colorado Cow (and Origin’s other farmer partners in Ohio and Pennsylvania) embrace more regenerative tenets: No-till practices to increase the microbial activity in soil and help sequester carbon, pasture-based diets, and rotational grazing.

Origin’s farming practices aren’t its only market differentiators. Bota first landed on Guernsey breed cows because their golden-hued milk is packed with good fats, calcium, and Omega-3s—not to mention it’s richer and more delicious than milk from Holsteins. An additional benefit is that Guernsey cows produce A2 milk (A2 refers to a beta-casein protein in milk). According to Bota, all mammals originally produced A2 milk before human intervention. When humans began domesticating cows, their milk mutated to A1 protein, which many believe is harder on human digestion than A2. Adrian and other A2 evangelists believe that 60 to 80 percent of lactose intolerant folks can drink A2 milk without digestion issues.

If you’re thinking that such high quality, butterfat-rich milk would produce fantastic cheese, you are correct. (In fact, Guernsey milk is what makes many of France’s famed cheeses so delicious.) That’s why, when Longmont-based Haystack Mountain Cheese discovered Colorado Cow was producing A2 Guernsey milk through its partnership with Origin, its team was excited to experiment with aging it into artisan cheeses.

Chuck Hellmer, president and general manager of Haystack, is thrilled with the results of the experiment: “The cheese has an unbelievably soft buttery texture, it tastes great… almost tastes like eating cheesecake.” Haystack is currently producing four cheeses with Origin A2 milk: original jack, chile jack, Rocky Mountain soft-ripened brie, and soft-ripened camembert. “They all turned out very well,” Hellmer says. “I believe the Rocky Mountain soft-ripened cheese is one of the best cheeses on the market, and the two jacks really meet the American palate, as the vast majority of Americans like simpler things.”

Haystack-produced cheeses, which are sold under the Origin label, are available at Natural Grocers stores across Colorado, as well as from Boulder County Farmers Markets’ curbside market and some specialty cheese shops, like St. Kilians. “When we broke away from corporate farming, we were nervous about our future. The first day Origin came into town, they locked down 40 Natural Grocers stores,” deGroot says. “Origin is a connection between rural life and city life. They’ve helped tie us to Denver.”

That said, if you ever happen to find yourself northeast of Denver in Kersey, you can also order your Haystack cheeses and milk (as well as gelato and butter) online from Colorado Cow directly and make a pit stop at the company’s pick-up shop.